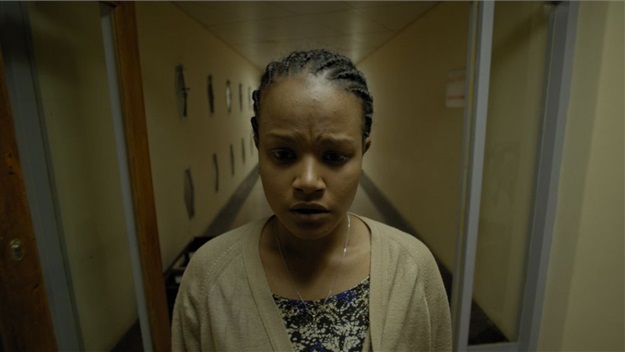 Busi (Petronella Tsuma) is a desperate young woman who finds work at a derelict hospital as a night-shift cleaner. She must deal with a predatory manager Mr. Ruatomin (Dawid Minaar), jaded coworkers and young abandoned patients in order to make money to bring her sister from their troubled rural home to Johannesburg. One night, Busi comes across Gracie (Kwande Nkosi), a little girl who is tormented by a nasty entity called The Tokoloshe, known to prey on children. Busi takes pity on Gracie, and even though she deals with the trauma of her own family issues and abuse, she sneaks Gracie out to live with her, unwittingly bringing the angry Tokoloshe into her home. Busi must protect Gracie, battle this entity and her own troubles to survive life’s harsh realties.

The most popular definition of the Tokoloshe is a hairy, lustful, elf-like creature from Zulu folklore who wrecks havoc on people, especially women and children, causing mischief or death. Pikwane successfully melds this mythological figure with the difficult subject matter of sexual abuse and rape. In several interviews, Pikwane said he wanted to represent misogyny and the patriarchy through his film and the figure of the Tokoloshe was key in representing the patriarchy and all the oppressive men in Busi’s life. His handling of the abuse Busi and Gracie suffered was thoughtfully done with a few moments of brutality along with flashbacks and eerie atmosphere, surrounding Busi with shadowy settings to represent the hidden corners of her psyche.

I loved that there were two black female leads in a modern horror dealing with a real issue in South African society (and beyond). Tsuma and Nkosi had wonderful chemistry as lost souls looking for redemption and safety, and for a low-budget film, Pikwane incorporated an artistic and slightly gothic feel, comparable to The Babadook and Under the Shadow that also dealt with trauma and mental distress in similar fashions. The use of effects for some decent jump scares was also well done, with a few subtle CGI moments building up to big the creature reveal.

The Tokoloshe was screened at the 7th Toronto Black Film Festival (proudly co-presented by the Blood in the Snow Canadian Film Festival), with one of the films producers, Cati Weinek in attendance. She talked about the rampant sexual abuse in South Africa and the need for Pikwane to address this through his film. She also mentioned the call for change with stereotypical roles for blacks in film, and she had great hopes for financing and creating more horror and films outside of the typical rom-com fare popular with South African audiences.

I think a lot of movie-goers will resonate with the characters and themes of The Tokoloshe. After having attended a talk given by Tarana Burke, founder of the #MeToo movement and advocate for sexual abuse survivors, I have to commend Jerome Pikwane and his co-writer Richard Kunzman for being real allies in the struggle for accountability. They’ve not only produced an encouraging debut horror feature with an exciting new director, but an important tool for creating dialogue about trauma.