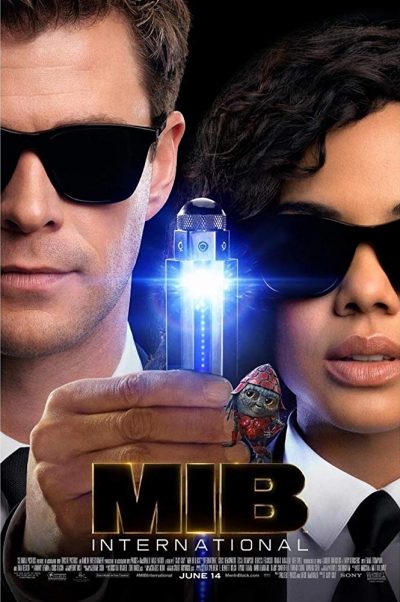 Will Smith and Tommy Lee Jones were the first to make Men in Black a fun, alien-filled comedy with gags galore.  As a franchise, the stories in subsequent films gave us more of the secret agency ready to protect the universe as we know it from invading extraterrestrials vying for galaxies to intergalactic doo-dads filled to the brim with power. The fourth installment, Men in Black International, crosses the pond to London and Paris where new agents fight a new alien threat.

As a child, Molly (Tessa Thompson) witnessed MIB agents neuralyze her parents after a pesky little alien invades her home. With the knowledge that there is life beyond the stars, she grows up to become a brilliant young woman with the goal to become a MIB agent. She soon learns she has to get creative to get into the top-secret headquarters, only to be discovered by Agent O (Emma Thompson). Her one-mindedness gets her a crack at being an agent in London governed by the stoic Agent High T (Liam Neeson), and her quick thinking gets her teamed up with the legendary Agent H (Chris Hemsworth), a once revered agent who has become careless.  When the double threat of powerful amorphous alien twins (Les Twins dancing duo Larry and Laurent Bourgeois) try to assassinate alien royalty, Agent H and M must figure out the who, when, and whys before there is irreparable damage done to the universe.

This colorful world of aliens has endless potential for high stakes and adventure. In this newest chapter, there seems to be a tried and true approach where if it ain’t broke, don’t fix it.  Director F. Gary Gray who directed 90s classic Set It Off, the acclaimed Straight Outta Compton and the hit Fate of the Furious, kept the same feel to the MIB universe with a touch of slickness, making the film a safe bet for a family night out at the movies.

Thompson and Hemsworth will fill seats due to their superhero Thor: Ragnarok past together; and there’s quite a bit of fun to be had, including a tiny alien called Pawny voiced by The Big Sick’s Kumail Nanjiani who gets most of the laughs. It was also exciting to see Les Twins, with their hugely successful dancing career leading them to a big budget movie. The film falls short however, with the formulaic and predictable galaxy in danger storyline, especially when there are two great talents as headliners who could give much more.  Thompson, who can play a superhero, artsy girlfriend and sultry executive, is charming if a bit over the top as the determined and ambitious Molly or Agent M, but more importantly, kids see a woman of color excelling at S.T.E.M.  She’s a role-model for little girls who also have their heads in the stars.  It’s also nice to note that the character Molly comes from a two-parent family in a nice home in Brooklyn. Not an unfathomable thing and an important representation of people of color in a big budget film.

Take the kids to see Men In Black International for a bit of fun, but they haven’t reinvented the galactic wheel with this one.