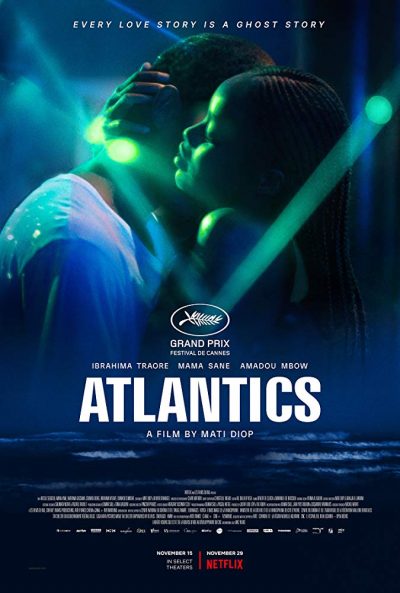 Mati Diop’s Atlantics (Atlantique) is a tale of loss, eternal love and a vibrant vision of modern African storytelling very much needed to expose filmgoers to new representations of genre film.

In the city of Dakar, Ada (Mame Bineta Sane) is betrothed to the rich and worldly Omar (Babacar Sylla) and she’s not happy. She is in love with Souleiman (Traore), a young construction worker who is smitten with her. They must meet in secret and Ada hasn’t broken the news to Souleiman but plans to tell him one evening at their local hangout. When she arrives, she learns that Souleiman, along with his fellow workers, has left Darkar in a boat for Spain, looking for better opportunities since the company they work for hasn’t paid them in months. Ada, along with the other young women of the town, are distraught, and they soon hear that the boat the men were in may have gotten into some trouble.  On Ada’s wedding day, one of her friends swears she sees Souleiman and his sighting coincides with a mysterious fire set in Ada’s posh matrimonial bedroom. The police are called in as strange things continue to happen, and when the women become feverishly ill and disappear into the night, there is much more that comes into play than just pining hearts.

Atlantics is a story about class, love, religion, and freedom wrapped up in a beautiful dream of a ghost story. Diop, along with co-writer Oliver Demangel, neatly encapsulates the occurrences of arranged marriages and the humiliation women must face to prove their virginity and worth, migrant workers, and the far-reaching stretch of capitalism in her 1 hour and 46-minute film.  She also creates a modern Romeo and Juliet story; and you’re not wrong if you think of the recent Demon by the late Marcin Wrona, Olivier Assayas’ Personal Shopper or even John Carpenter’s The Fog, but this time, we get this mélange from a different perspective – an everyday Senegalese perspective, presenting a cultural newness that is desperately needed in this cinematic wasteland of remakes, reimaginings, and regurgitations populated with homogenized faces.

Claire Mathon’s cinematography is simply stunning. Gorgeous sunsets capture the roiling Atlantic Ocean; highlighting the hypnotic and seductive call of faraway lands. It surrounds Dakar like a patient giant, waiting to devour you at any moment. The performances are gorgeously subtle and the cast is gorgeously black; skin tones sparkling in varying shades of darkness. Look for Sane’s riveting transformation into an independent young woman, and the other female cast members show the fleeting joys of youth mixed with a world-weariness that is undeniable with such a transient future ahead of them. You’ll also fall for Amadou Mbow as the wonderfully earnest detective Issa Diop desperate to get to the bottom of all the perplexing activity and the ethereal synth scoring by Fatima Al Qadiri.

Diop’s film has won the Grand Jury Prize at Cannes 2019, and she is the first black woman director to win such a distinction. I am equally overjoyed and broken that it has taken this long for a black female filmmaker to be accepted into this bastion of the industry fold. This quiet masterpiece is also being selected for the 2020 Oscars for best international feature film and while there have been other African films selected over the years, I want Atlantics and Diop to win; for her graceful take on a political/socio-economic situation, for Senegalese youth who deal with the pressures of the modern world, for diversity on screen and to win for black women directors around the world who show they have unique voices that need to be heard.

Atlantics is streaming now on Netflix.