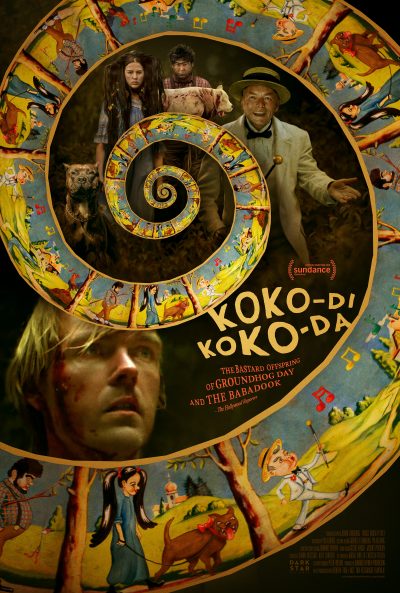 Life can be a series of repetitions. Like a set schedule, many of us welcome familiarity and a predictable path such as school, work, marriage, and children. This is the plan pushed upon us as we go about our business with blind faith, not acknowledging that things can go wrong at the drop of a hat. In Johannes Nyholm’s Koko-di Koko-da, repetition becomes a nightmare for one family stuck in a scenario of grief and turmoil.

Tobias (Leif Edlund) and Elin (Ylva Gallon) take their daughter away for her 8th birthday. When tragedy strikes during their celebration and Maja (Katarina Jakobson) dies, their life is changed forever. Three years later, Tobias and Elin go on a camping vacation. They argue non-stop and clearly don’t want to be there, but they’re trying to work on their fractured marriage. When three strange travelers, lead by a small man in a dapper white suit and straw hat, discover their campsite, their lives become more of a nightmare than they can imagine. The dapper little man (Peter Belli) instructs his companions, a strong man carrying a dead dog (Morad Baloo Khatchadorian) and a strange young woman with a pit bull (Brandy Litmanen), to terrorize the couple. There is an uncanny resemblance to characters on a coveted toy Maja wanted for her birthday, except they are more grotesque and menacing. As Tobias cowers, his wife is beaten and shot. He is attacked by the dog, which he kills, but is held at gunpoint by the young woman, execution-style. This is only the first of several brutal interruptions that repeatedly happen to the tune of a maddening lullaby about a dead rooster. Tobias and Elin may never escape the trio of doom unless they figure out why they’ve been targeted.

I wanted to see this Swedish film when I first saw the trailer. It was puzzling, the characters looked odd, and there was a cat in the cast. Unfortunately, it was only doing the festival circuit and wasn’t available. With its release on November 6 in virtual cinemas in the US and VOD on December 8 in the US and Canada, I was thrilled to have a chance to see what other critics were talking about. The lasting impression from Koko-di Koko-da is the desperation to escape the nightmarish grief each parent feels. Tobias and Elin suffer differently; Tobias runs even though his wife is in danger, and Elin is always blindsided by violence until she symbolically follows her instincts. If you’ve ever suffered a loss, you’ll see this film is a perfect example of how people from the same family process feelings differently. It’s horrific not to realize that we are fighting with mortality at any age and how a tragedy can govern your life forever.

I can only imagine how emotionally taxing the film was on the cast. Edlund incited rage in me for his cowardice during the first attack, but as you see him relive this experience over and over again, you realize he is the manifestation of his grief, marriage problems, and self-loathing. In an interview, he also said that he lost 20 pounds to show the physical toll. Gallon was fantastic as Elin. Even though she seemed just as closed off, her journey becomes one of understanding that the film’s conclusion doesn’t necessarily clarify for the audience. Then, there are the travelers. I can’t describe the terror the trio elicited. Belli, Litmanen, and Khatchadorian all played their roles with a dead-eyed glee that was hard to watch. The intensity of the cruelty will mostly likely send those performers to therapy at some point.

Nyholm also uses some unique shadow puppetry, but, at times, it broke the tone of the film, although that’s what he wanted to do. It was his attempt to give the audience a break from all the cruelty and delve into a fairy tale as an interlude. They were most effectively used when Elin has a private show of self-reflection.

Koko-di Koko-da is not for the faint of heart or those sensitive to grief (although for some, it might help) or misuse of animal aggression. It’s truly extreme cinema, but one that turns a reality of life into a dark fantasy.