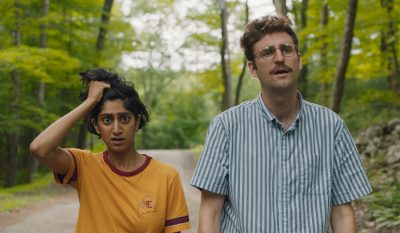 In act of bettering ourselves and being less self-absorbed, we become self-aware and more self-absorbed, and it’s facilitated through technology. If you’re not following me, you might get it when you watch the alien invasion comedy Save Yourselves!

Su (Sunita Mani) and Jack (John Reynolds) are a millennial couple. They live in Green Point, Brooklyn and are the typical young and ambitious types who want it all and want to stay woke in their gentrified part of the world. They are stuck on technology, their phone notifications sometimes come before hanky panky, and they treat their computers like the crown jewels. When a chat with Jack’s ecopreneur friend Raph (Ben Sinclair) plants a seed for them to get away from it all, Jack and Su decide to head to Raph’s cabin for a week to unplug from the world wide web.

They make a go at it with hikes, failed firepits, and lots of drinking. Su wants to become better people, and after Jack’s initial protest of her planned exercises feeling like work, he gets on board with exploring who they are and who they can become. Unfortunately, their self-discovery is cut short by some deceptively cute pouf-like aliens bent on ethanol and whacking humans (and anything else) with sticky frog-like protrusions that prove to be deadly. Will Jack and Su be able to save themselves or perish at the end of a sticky pink tongue?

For their first feature, directors and writers Eleanor Wilson and Alex H. Fischer pulled on their own relationship to create authentic characters. They also cast the actors well, too, since Mani and Reynolds knew each other from the Brooklyn improv scene. The audience can find a piece of themselves in Su and Jack; their silliness, honesty and goofy affection for each other coming across as completely believable and relatable. I love that there’s a brown woman as one of the main characters in a rom-com/alien invasion film. There’s also a sense that she’s connected to her culture through her mother. It’s a tiny thing, but if Su is a first-generation, American-born person, her mother’s accented voice is a tether to her culture and a comfort to her as well. Su feels bad that she initially ignores her mother’s worrying, which can be a routine with immigrant parents, but here it’s a lifeline for Su as the world turns to chaos.

Why just make a side-splitting comedy with relatable characters? Wilson and Fischer go for the gold and throw in a few messages in this film, which are pretty poignant.  From our obsession with technology, its merits and dangers, to the self-absorption that permeates our lives because of said technology and the false thought that we have to be better, faster, and stronger to achieve an unattainable goal, there’s at least one lesson here for the masses.

Check this cleverly written, brilliantly played Save Yourselves! On VOD December 22.