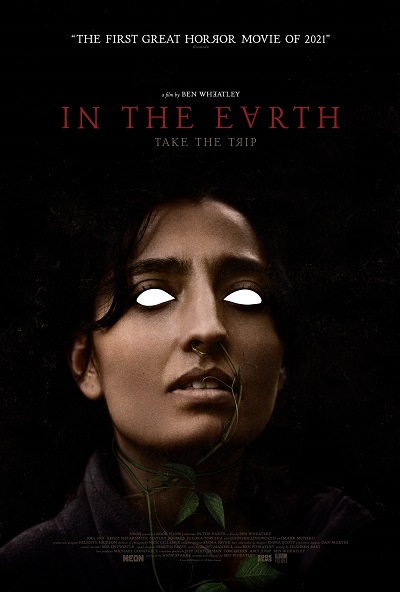 Ben Wheatley has given us some pretty great films. From Kill List to A Field in England to Sightseers, he manages to bring his unique style to every story he tells. His latest film pulls him out of the lockdown and back into his signature folk horror themes with In the Earth.

Martin (Joel Fry) is a scientist who volunteers to go deep into the forest to join a former colleague, Dr. Wendle (Hayley Squires), where she is researching crop proliferation. He must go to a forestry lodge as his first checkpoint, and the team there is antsy since the world has been dealing with a mysterious virus, and they enforce strict health protocols. Martin’s guide Alma (Ellora Torchia), is a no-nonsense park ranger who leads him out into the dense bush for the 2-day hike. When Alma and Martin suffer a nighttime attack at their camp, Zach (Reece Shearsmith), a mysterious man living in the forest, rescues them, but they soon realize his motives are much more sinister.

In the Earth is a fusion of many layers. There’s the typical “don’t go into the woods” campfire story that reaches new heights amidst a pandemic. Zach wielding an axe like the horror slasher everyone knows and loves is a prominent theme, and Wheatley throws in the Malleus Maleficarum and an ancient forest god for his folk horror touch. An Adam and Eve narrative makes a special appearance too. Zach doubles as a God-like figure, manipulating Martin and Alma as he does the bidding of “The Thing in the Woods,”; and there’s a survivalist story with a white colonizer thread I couldn’t shake.

It’s always great to see BIPOC as lead characters, especially in horror, but with their inclusion comes another layer of insight to any film. As I watched Zach terrorize Martin and Alma, I couldn’t help but think of the fight for Indigenous lands and the robbing of Indigenous people as explorers claimed the natural world for themselves. Like Dr. Wendle’s statement about the crazed Zach making meaning where there isn’t any, I wonder if this rabbit hole my mind refuses to leave is me simply grasping at very thin threads, but my gut tells me otherwise. I doubt Wheatley had this idea front and center either, but it’s an important one to recognize since British imperialism is historically one of the leading culprits of colonization. He also felt the immediate need to document the real pandemic we’re living in right now instead of ignoring it. I also love the commentary on the industrial world being stopped in its tracks and controlled by nature, which I imagine has had enough from us pesky humans.

The cast was pretty fantastic. Give me more of Ellora Torchia. We saw her briefly in Midsommar, and her final girl chops are displayed in fine form here. Fry could have come right out of the cast of The Office, with his good-natured bumbling, and Squires as the intense scientist ready for a breakthrough works as opposition to Wheatley regular Shearsmith and his crazy woodsman turn.

The visuals are gorgeous, flipping from lush green landscapes to psychedelic colours and imagery. It’s an experience meant for the big screen, and I hope Wheatley fans have a chance in the future to see it as it was intended. The score by veteran composer Clint Mansell, who also scored Black Swan and Requiem for a Dream, is also worth a booming sound system for the full immersive effect, and yes, I’ll be buying the In the Earth soundtrack when it’s available.

Find In the Earth streaming now.