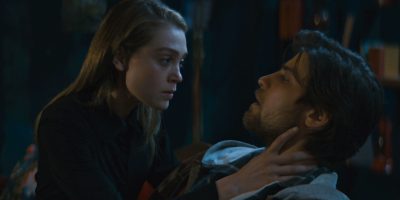 Director Blaine Thurier and his co-writer Leonard Farlinger give us a dryly humorous vampire film in the wintery world of Kicking Blood.

Anna (Alanna Bale) is a young woman who works in a library. She is friendly with Bernice (Rosemary Dunsmore), an ailing older woman, the only real friend she seems to have.

Robbie (Luke Bilyk)  is a hard drinker, careless and not interested in being alive anymore. When they meet in an alleyway, Anna thinks he’s an easy meal because she’s a vampire, but his eagerness to end his life puts her off, and she doesn’t kill him, letting him stay overnight instead. Robbie ends up drying out at Anna’s dungeon-like apartment. At the same time, she hunts with two other vampires, Nina (Ella Jonas) and Boris (Benjamin Sutherland), which no longer feels right to Anna, especially when Bernice’s health takes a turn for the worse. After Robbie kicks the bottle, Anna tries to kick her urge to kill and drink blood.

Kicking Blood is a stark neo-noir about finding your humanity amid despair. The two addicts are reminiscent of Faye Dunaway and Mickey Rourke a la Barfly, but Anna and Robbie don’t hide behind their addictions. They face it front and centre, making difficult choices. There are adversaries in each of their camps, Vanessa, played by Vinessa Antoine, who wants to lure Robbie back into their toxic relationship and Anna’s hunting pals. Their addictions bond the two, who fight to stay the course and hopefully cross the finish line.  Bale pushes her humanity just out of reach for a lot of the film while Bilyk embraces his fully, and when she finally sets her sights on it, you begin to care about Anna’s fate.

See Kicking Blood for the cinematography by Jonathon Cliff and a brief but interesting (and very Canadian) take on modern vampire lore.