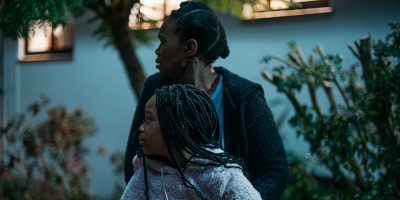 In Mlungu Wam (Good Madam), archaic ideals take on a nightmarish role for a woman and her family.

Tsidi (Chumisa Cosa) is estranged from her extended family after her grandmother dies. She leaves the family home to stay with her mother, Mavis (Nosipho Mtebe), a maid for an ailing, rich white woman named Diane (Jennifer Boraine). Mavis has worked there for a very long time, and she isn’t thrilled to see Tsidi show up with her daughter Winnie (Kamvalethu Jonas Raziya). Reluctantly, Mavis allows her daughter and granddaughter to stay in the large house, which sits behind a gated property in a well-to-do area of Cape Town. Tsidi’s memories of growing up in this house aren’t pleasant, and she’s frustrated that her mother still lives a life of servitude after all these years. As Tsidi becomes more unsettled in the house, waking nightmares begin to plague her, and resentment towards her half-brother Stuart (Sanda Shandu), who was treated as one of Diane’s children, starts to bubble to the surface. The atmosphere becomes more oppressive, and Tsidi learns about the dark past of Diane’s household the longer they stay within its walls.

Atmosphere is everything in Mlungu Wam. The home’s interior, long hallways and a rabbit warren of rooms make for a claustrophobic experience as Tsidi returns to memories that suffocate her. Director Jenna Cato Bass and several co-writers, including Babalwa Baartman, introduce you to a psychological space mired in history. Bass does an excellent job of illustrating the trauma of South Africa’s past, as she mentioned in the film’s intro, using the genre she loves. Apartheid ended in 1990, only 30 odd years ago, so that dark legacy is still haunting South Africa as Black Africans move towards autonomy. It’s a bitter pill for those who oppressed Black people, clinging to the inequalities of an archaic South Africa.

The imagery includes tight close-ups of circles and the cast’s faces, lending to a strange tension since anything beyond what the lens shows the audience oozes with unseen menace. It also reflects Tsidi’s mindset as she tries to figure out what is happening with her mother’s obsession with Diane and her own unpredictable emotional state. Cosa plays this well, losing control incrementally as Tsidi spirals. While the story is at times difficult to grasp through the use of flashbacks, it makes up for it with performances, the haunting score and vocals, and the sound design, which turns the mundane into terrifying foreshadowing.

There will be many comparisons to Jordan Peele with Mlungu Wam, but I’m wagering that Bass will give Ari Aster a run for his money when it comes to the psychology of dysfunctional families and the horrific.