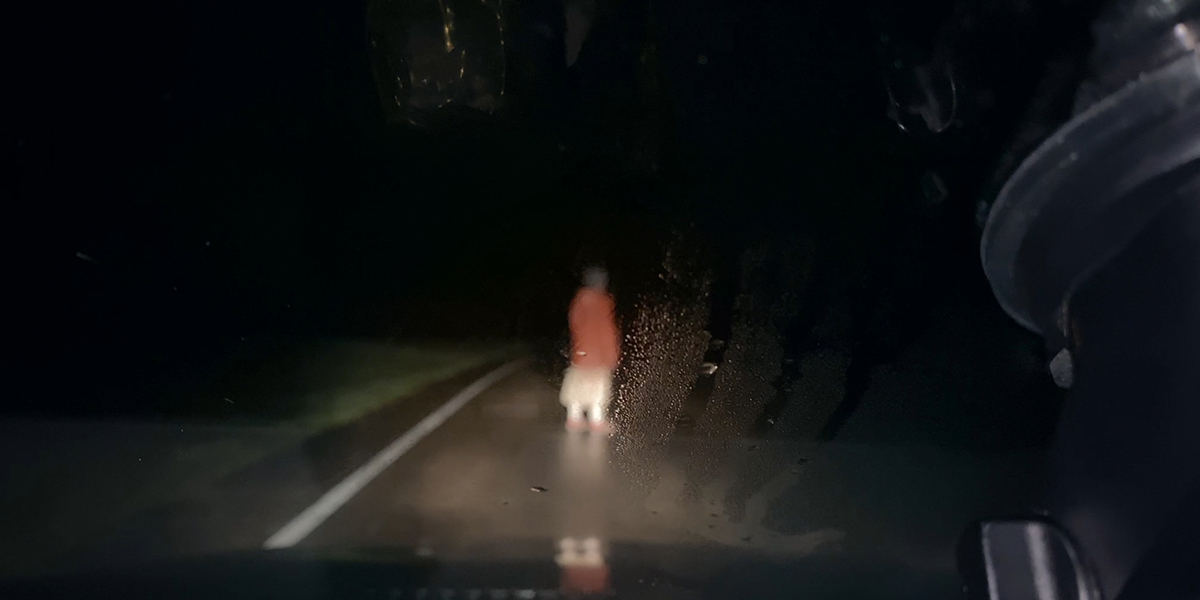 What do you get when an anti-vaxxer streaming star meets up with the demonic? Rob Savage’s latest horror fiasco, DASHCAM.

Annie Hardy is a live-streaming improv musician who has an online show called Dashcam. She raps at the drop of a hat and has many fans. Annie is also an anti-masker and a COVID denier. Camera and live stream viewers in tow, she decides to make a surprise visit to the UK, to see her ex-band member and buddy, Stretch (Amar Chadha-Patel). Much to his girlfriend’s chagrin, Annie is the worst houseguest ever. When she steals Stretch’s car, she takes a delivery order from his nightly job without his permission, of course, only to be offered a lot of money to take a sick woman to an address. Annie realizes there is more than just sickliness at play, and when Stretch catches up to her, they have to battle a demonic force.

Hardy, a musician from California, plays a version of herself (that apparently isn’t that far off from her real persona) in this POV horror flick. She has to be the most obnoxious character I’ve seen recently, with her MAGA hat, off-colour quips and disrespect for this pandemic. It feels “too soon” at times, and I found myself wishing she would be mortally wounded just to shut her up.  Some of the camera work was good to give a sense of panic, and I liked the effects, but overall, some of the action didn’t make sense, and I found Hardy’s character to be too much, with her ongoing free-flow of rap at the worst moments becoming tired after a while. And I must be getting old because the constant run of sexual jokes played for their obvious offensiveness was also tired, especially during the closing credits.

Savage and his team did a cool thing with Host last year. He took an opportunity to show his creativity while in lockdown, and it worked. Here, he showcases a person who, in the real world, scoffs at the hardships people have endured during the pandemic and racial unrest, and this character has a best friend of colour to boot. I scratched my head at this and also at the supporting cast being Black. Yes, I’m going to be that person, and I’m hoping that POC was cast for this film because Savage et al. is attempting to be inclusive and not make some inflammatory point, but then again, that would take too much thought, which clearly didn’t happen in DASHCAM.

If you’re sensitive about people ignoring masking and being a selfish moron during the pandemic, you might want to skip this one. But if you don’t mind laughing at a tone-deaf lead who seems to regenerate like that nasty orange beast that was ousted from the Oval Office not so long ago, have at it.