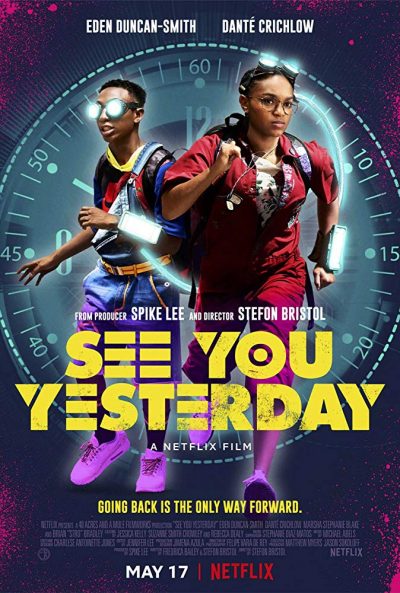 Netflix does it again by taking a chance on representation. In the tradition of classic TV series like Sliders and Quantum Leap, Stefon Bristol’s first feature film See You Yesterday combines time travel, mistaken identity and black family bonds for a strong sci-fi debut.

CJ (Eden Duncan-Smith) is a brilliant Brooklyn high school student and along with her best friend Sebastian (Dante Crichlow), devises a time travelling, or temporal relocation, machine. After a few technical glitches, they successfully jump to the day before. When her brother Calvin (Astro aka Brian Bradley) gets killed by police due to mistaken identity, CJ thinks she can change his destiny by jumping back in time to save his life.

Expanding on his short film of the same name, Bristol gets major points for giving us a black female protagonist who is determined, ambitious, intelligent and extremely likable, as well as a heartwarming take on the West Indian community in Flatbush, a loving brother and sister relationship, and a single mother family that lost their father while he was in the army, not by any crime. He shows us everyday life in Brooklyn for black folks, from visiting the neighborhood bodega to being harassed by the police.  The characters seem real with Duncan-Smith, Crichlow and Bradley showing an easy chemistry that transitions from light banter to intense discussions well. Bristol was an intern for Spike Lee, who also produced the film, and you can see Lee’s influence in an homage to his “double dolly shot” and the social commentary narrative, but Bristol has created his own vision of young black Brooklynites in jeopardy.

There will be obvious comparisons to Jordan Peele’s recent Twilight Zone episode, “Replay”, starring Sanaa Lathan. Here, she plays a mother who wants to document her son’s arrival at college with her vintage camcorder only to realize she can rewind the device to go back in time and save him when a racist cop guns him down. Both stories deal with the daily fears of black people being pulled over, interrogated and killed because of the color of their skin. Both deal with strong women who refuse to take the fate doled out to so many innocent black men in this time of protest, but where Peele made an effort to show blacks conquering, Bristol aims for a sobering and open-ended resolution.

The look and feel of the film is deceiving. The wardrobe is hip and young, representing a DIY style of kids on a budget.  A squeal-inducing cameo by one of the original time travellers Michael J. Fox as CJ’s science teacher Mr. Lockhart, the bright, summery cinematography, and strong, witty language seems like a formula for fun, but Bristol has made a teen sci-fi film for this new age of awareness.  This lightheartedness changes tone abruptly to mirror life when you first realize your world isn’t impervious to the outside terrors of violence. Even though this film is speculative and fiction, for those of us who have lost someone when we are young or naïve, it’s a reality. This may not please a lot of people because the film also ends abruptly, but it’s all too real because in this current climate, there aren’t a lot of black families who get their happy ending.

See You Yesterday is streaming now, so do yourself a favor and see it for a perfect representation of how black people continue to create their own narrative. It gives us a wonderful black female character, the message of both despair and hope, and a story that could easily be continued as a popular Netflix series.