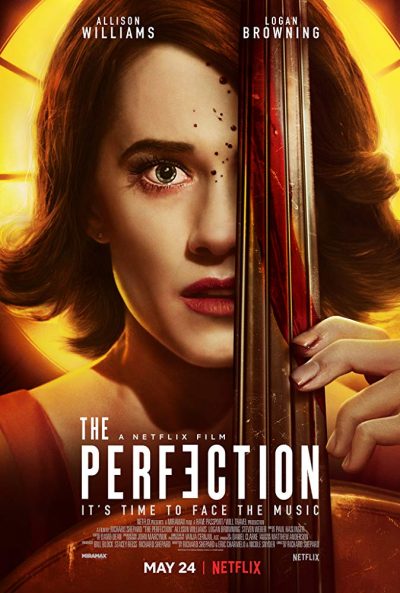 If you’re thirsting for an Asian horror-inspired, stylized roller coaster ride with buckets of tension, look no further than Richard Shepard’s The Perfection.

Charlotte (Allison Williams, Girls, Get Out) is a musical prodigy.  Enrolled in the elite Bachoff Academy where students are hand-picked for their talent, she is destined to become a legendary cellist. Family obligations put her career on hold and 10 years later, Charlotte is ready to reclaim her life.  She reconnects with the school dean Anton (Steven Weber, Channel Zero), and is invited to Shanghai to judge a competition along with the school’s newest star, Lizzie (Logan Browning, Dear White People). The two women soon learn they are fans of each other’s work and become inseparable.  When Lizzie falls mysteriously ill, both their worlds change forever.

There’s a fine line you walk when reviewing The Perfection because it presents a unique timeline that catches you off guard, making it difficult to navigate around many a spoiler. What I can say is that the film is exactly what a fan of Asian extreme cinema would enjoy, and Shepard parlays the themes, style and body horror of Asian extremity in an exciting way for North American audiences. He does so not because the film sets the scene in Shanghai or because there are Asian actors, but by using the tone and beats so often used in Asian extreme cinema. Shepard has mentioned in interviews The Handmaiden and Oldboy by Park Chan-wook as inspirations, and I also get a Sion Sono or Takashi Miike vibe as well. The story starts subtly, lulling the audience with romance and kinship that’s sexy and not gratuitous, then landing an unexpected roundhouse kick to our plot expectations. We’re sent reeling just enough to collect ourselves and follow along for the ride.

Both women were made for the all-American girl role; Williams, who played the awful Rose in Get Out, is perfect as Charlotte with her fresh looks and innocence versus Browning’s appeal as the more worldly and tougher of the two. It works well, especially since they’ll need to draw on their opposite bad girl/vulnerable selves later. They both reportedly learned how to play the cello as well, to make their performances believable, and their chemistry is undeniable.

The haunting music was composed by Paul Haslinger, former member of Tangerine Dream, the band so beloved for their numerous film scores, so there’s some major musical street cred involved. I also love that Nicole Snyder and Eric C. Charmelo who both mastered complicated plots for the TV series Supernatural, were on the writing team. Their skill at dealing with intertwining plot threads is well used here.

Shepard’s The Perfection ultimately captures the intricate web women must navigate for success, the weight of societal expectations, and what women have endured to achieve it minus the male gaze-y tropes. Be prepared for abuse, full-on gore and a whole lot of twists and turns. It’s mandatory to endure all of it for one of the most bizarre, violent and satisfying finales I’ve seen in a long time.

The Perfection is streaming now on Netflix.  Let it be the salve for you jaded horror fans out there.