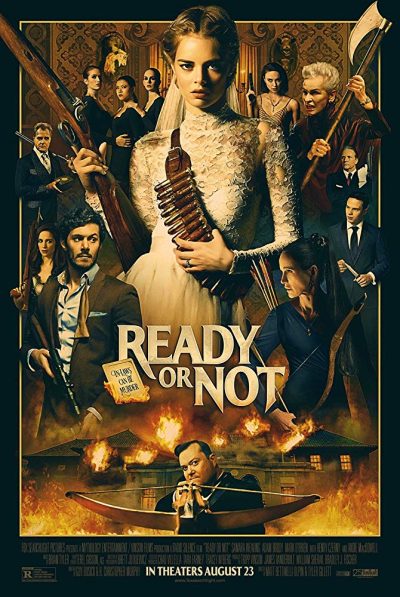 Often,”marrying up” carries a set of consequences that you must adhere to for acceptance into the fold.  Proper etiquette, dressing to impress and a background that isn’t too sullied by scandal lest you be judged harshly is all very important in this superficial world. But what if marrying up means marrying into something more sinister than you could ever imagine? In Ready or Not, V/H/S alumni Matt Bettinelli-Olpin and Tyler Gillett give us a run for our money as a new bride gets acquainted with her sadistic in-laws.

Grace (Samara Weaving) is about to marry Alex Le Domas (Mark O’Brien), one of the heirs to the Le Domas game dynasty. Surrounded by old money in a massive mansion, Grace is filled with emotions and nerves as she comes from a meager, foster home background and is about to join the world of the very rich. The family members are eccentric, with Aunt Helene (Nicky Guadagni), who looks like Nosferatu’s stylish ex-wife, Daniel (Adam Brody), Alex’s surly and sauced brother, and Becky (Andie MacDowell), their beautiful Southern mother. Their father Tony (Henry Czerny), is the picture of a patriarchal figurehead with loads of family history and a commanding presence. It’s tradition for the family to play a game at midnight when someone gets married; using a special box passed down from ancestors to choose a game at random for the newest member. Instead of checkers, Grace gets the dreaded Hide and Seek, which means she must hide and the family seeks, however things get deadly when she realizes she must be caught and dealt with in a very unpleasant way, because the rich never want to lose.

I was not ready for Ready or Not, but I was definitely pleasantly surprised. The film was all action, all suspense, gorier than you’d think, and a lot of fun. Writers Guy Busick and Ryan Murphy managed to keep the banter funny, clever and extremely dark without going for cheap gags, and I was thrilled to see a mostly Canadian cast.  Along with Czerny and Cube’s Guadagni, we were also treated to  Melanie Scrofano of Wynonna Earp as Alex’s high-strung and strung out sister Emile, Orphan Black’s Kristian Bruun as her husband Fitch, and John Ralston as Stevens, the evil butler. They were all in fine form as the psychotic family members bent on catching their prey regardless of the cost. Weaving was stellar as the determined new bride fighting for her life, and I also have to give kudos to Andie MacDowell, who was deceivingly sweet and just gets more stunning with age.

With many a clever spin on a classic cat and mouse chase, spot on performances and an evil family you’ll actually kind of love, Ready or Not is destined to be a horror fan’s go-to for fun.