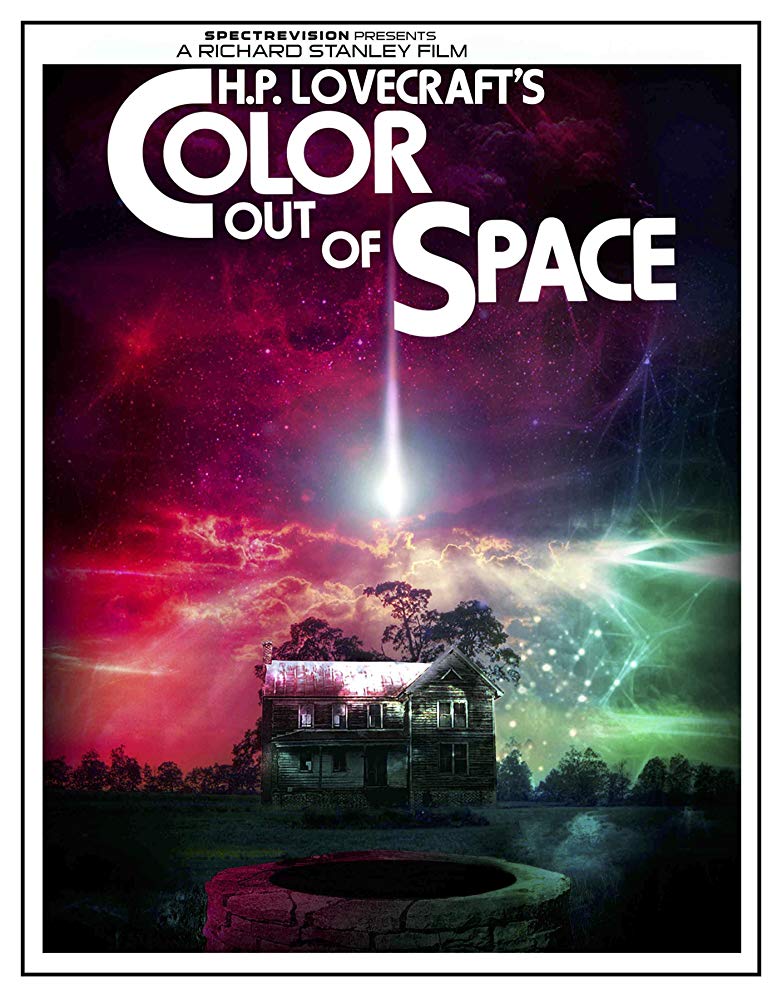 It’s been some time since we’ve seen something directed by the infamous Richard Stanley, once slotted to helm the tragic Island of Dr. Moreau, now the subject of a popular and mythical documentary Lost Soul: The Doomed Journey of Richard Stanley’s Island of Dr. Moreau by David Gregory. While he’s been writing screenplays, Color Out of Space is the first film Stanley has directed since 2013, and guess what? It’s fabulously strange, creepy and, yes, colorful for so many reasons.

Nathan (Nicholas Cage) is a father and husband who, needing to get away from the big city, decides to take over his deceased father’s farm and make a go of raising alpacas, the animal of the future. His wife (Joely Richardson) is recovering from breast cancer and trying her best to deal with high powered clients on a farm via Skype and sketchy internet service while trying to raise her teenage children:  Wiccan-obsessed daughter Lavinia (Madeleine Arthur), nerdy Benny (Brendan Meyer), and her youngest, Jack (Julian Hilliard). There also might be a problem with their water supply, so a handsome hydrologist Ward Phillips (Elliot Knight) checks out the surrounding area and also takes a liking to Lavinia.  When a meteor crashes onto their front yard, a strange series of events occur, and it’s up to Nathan and Ward to figure out what might be transpiring as this alien object slowly changes the landscape and all their mental states.

Color Out of Space was an efficient treat and my only TIFF viewing this year. With pacing that unexpectedly ramps up, stunning visuals and a whole lotta Cage, Stanley shines with his director’s hat firmly in place. Along with my rage-daddy Cage, the entire cast was excellent from little Hilliard to the charmingly nuts Tommy Chong as the resident mystical weed man Ezra. Adapting a story written by H. P. Lovecraft so that it’s relevant in these times is not an easy feat when this particular story has been done a few times over the decades, but Stanley, along with his long-time collaborator and writer Scarlett Amaris, manages to do it while broaching current environmental issues. I also loved that the film’s narrator, played by Ward’s character, is black, perhaps a thumbing of the nose to Lovecraft’s notoriously racist views.

The digital effects were stunning and I’m glad I was able to see it on an IMAX screen even though the film wasn’t shot in that format. It really emphasized the colors and landscape well, immersing the viewer into this special world of madness. For the record I know there are comparisons to Alex Garland’s Annihilation, but to be honest, I prefer Color Out of Space because although it’s also a visual spectacle and an environmental morality tale of sorts, it doesn’t take itself too seriously.  And those of you who want some practical effects will not be disappointed. Stanley serves up some mutant creepy crawlies that will surely make you squeal with delight.

I highly recommend seeing Color Out of Space, not only to celebrates Stanley’s return to the director’s chair, but also because horror never looked so good.