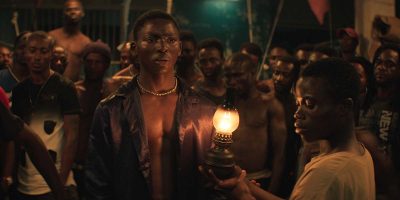 Tall tales, danger, and a dark world of honor take center stage in Philippe Lacôte’s Night of the Kings.

MACA is a notorious prison in Côte D’Ivoire, D’Abijan. It’s overcrowded and neglected, and the inmates are left to their own devices, creating a hierarchy and society that suits their needs. From the outside, MACA looks like a lawless free-for-all, filled with various criminals who are ready for anything. But there is a code within the prison’s crumbling walls, one of a mystical nature and one that must be obeyed in an honor system that even the prison chief Nivaquine (Issaka Sawadogo) can’t prevent. The first rule is that the “Dangoro” who governs all prisoners must take his own life if he falls ill.

When a young pickpocket (Koné Bakary) comes in fresh and fearful, the criminals who live in MACA gleefully taunt the new target. Blackbeard (Steve Tientcheu), the prison’s criminal overlord or dangoro, is dying and must appoint a new “Roman” or storyteller before his influence and power run out and before he must kill himself according to the MACA code. He is immediately taken with the new youngster and appoints him the Roman who must tell a tale on the night of the red moon or face death. Terrified and left with no choice, the new Roman weaves a tale about the drug lord Zama King to keep himself alive until dawn.

I generally don’t like prison films because they can be degrading and stereotypical, especially with BIPOC, but here, we have a society within a society that has created a system of mythology and ceremony to keep order. These men know who they are and accept their crimes and guilt in this microcosm of brotherhood and deceit. Theatrics and tradition rule this place, and instead of the typical violence known in prisons, a menace gives the dark yet colorful environment an otherworldly feel as the inmates struggle for power during Roman’s epic tale.

The performances are all so riveting, with Bakary holding court as the skittish Roman surrounded by the large and rambunctious cast.  There is also a commentary on the politics of Côte D’Ivoire, bringing the ousted president Laurent Gbagbo into the narrative, as well as song, dance, and insertions of striking visuals to give life to Roman’s narration.

Rich with a story that, for this reviewer, recalls Black Orpheus for the surrealist retelling of a mythological tale, Night of the Kings brings the tradition of the griot, Scheherazade, and the bard onto an unlikely stage and mesmerizes until the morning sun’s first rays.

Check out the Toronto International Film Festival from Sep 10-20, 2020.