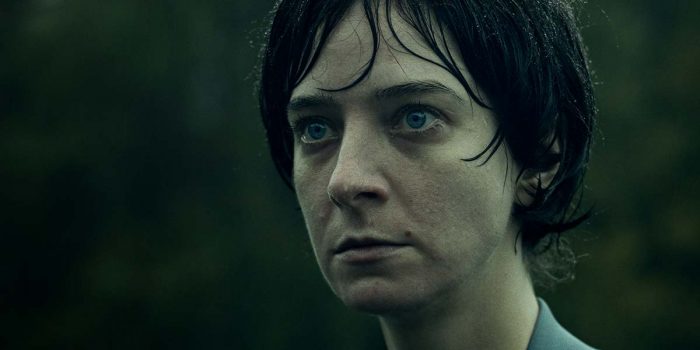 When a woman is subjected to an act of violence, it has to be obvious; otherwise, she will most likely be to blame. There’s no room for subtleties, with sympathies reserved for a stranger/victim dynamic. In Violation, Madeleine Sims-Fewer and Dusty Mancinelli’s feature debut, sexual violence and familiarity cross the breaking point for one woman and her family.

Miriam (Madeleine Sims-Fewer) and her husband, Caleb (Obi Abili) head to a forest cabin for the weekend with her sister Greta (Anna Mcguire)and brother-in-law Dylan (Jesse LaVercombe). Miriam and Caleb are having relationship problems, and it shows, and her relationship with Geta has always been prickly. When a fireside chat turns into sexual assault, Miriam deals with matters in her own way.

I will try to stay as spoiler-free as possible, but Violation is a film that some may only watch once due to the extreme nature. Extreme not because of the violence or sexuality or clinical gore on the screen, but because of the intense emotion that doesn’t exactly assault you full-on. It’s more of an insidious stain that grows on the fabric of gender and sexual politics.

Sims-Fewer’s complex portrayal of Miriam is the main attraction, but her co-stars compliment her actions by each being clueless to her pain in very different ways. Each exchange Miriam has with the people in her circle lets the audience know she is what would be considered abrasive and reactive. Greta reports anecdotally that Miriam rarely thinks of anyone else involved and acts before she thinks for almost every situation-never considering the consequences. If we’re looking at gender roles, Greta is a woman who appreciates more traditional aspects of her marriage to Dylan. Miriam seems to reject traditions, right down to her husband, Caleb, who is Black. It’s as if he is her red flag of defiance, and Caleb doesn’t appreciate her argumentative nature and scoffing at Greta’s devotion to Dylan. Miriam seems to waver the power dynamic in traditional relationships by refusing to make nice, and It’s through these moments we see the complexities of gender roles in the film.

Some of the more disturbing scenes also pick up on uncomfortable shifts in these roles. Seeing a man’s fully nude body as first virile and sexually ready then prone and slack after Miriam takes charge and attacks him was Violation’s most striking oppositions. Here, a man’s body is objectified, yet an erection is a weapon wielded in Miriam’s seduction/takedown scene. Even though she tied up her subject, it still signified he felt he was in charge, and her ministrations were for his arousal, not hers.

When someone suffers a trauma, sometimes the minutiae overtake the more significant moments. The directors put a microscope up to small moments within the larger plot to show the focus of Miriam’s determination to exact her revenge. And there is a fluidity in the timeline that heightens the events leading up to Miriam’s plan that leaves you disoriented. When you make connections between the purposefully disjointed scenes, you realize the gravity of each interaction. If I could get through this harrowing narrative a second time, I’d almost want to watch it backward. The shifting landscapes with camera angles by cinematographer David Crosby weave in and out of Miriam’s reality. It’s an effective tool to give the viewer an idea of how trauma works. The natural setting also brings up Miriam’s utter isolation as she sees the truth of violence and fears for her sister’s well-being.

Violation is a beautifully shot film but shows the ugliness of how perceptions ruin relationships and trust while betraying reality, and opens a window to sexual trauma.

Check out the Toronto International Film Festival from Sep 10-20, 2020.