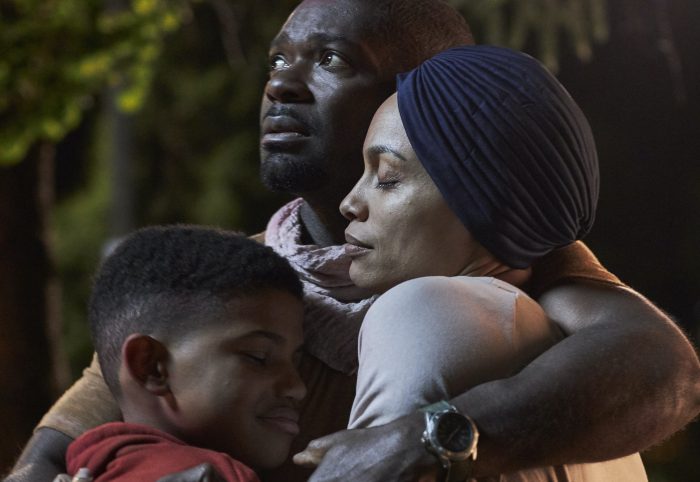 Actor David Oyelowo’s love for 80s cinema like The Goonies and representation inspired his choice for his feature directorial debut. In The Water Man, he takes us on a heartfelt journey with a boy, legend, and renewed faith in family.

Gunner (Lonnie Chavis) is a creative child that his father, Amos (David Oyelowo), doesn’t understand. He’s not a jock and would rather devour a ton of books, draw, and cuddle with his mother, Mary (Rosario Dawson). Sadly, Mary has leukemia. Gunner is determined to find a cure for her, and when he learns of his small town’s Water Man legend about a mysterious man who has the secret to immortality, Gunner goes on a quest with an unlikely partner to save his mom.

The Water Man is Oyelowo’s directorial debut, and it will plant him firmly in a director’s chair in the future. With lush, warm cinematography by Matthew J. Lloyd that looks like the film came out of a storybook’s pages, there’s a definite family vibe perfect for a broad audience. Chavis is such a pleasure to watch, and from his This is Us tear-jerking performances, we know he can deliver as the sweet Gunner. The role of Jo played by Amiah Miller was interesting, but the character seemed to be slightly too old to find common ground with Gunner. I didn’t quite buy the big sister vibe, and it would have had slightly more charm if Gunner was opposite a kid the same age. Maria Bello and Alfred Molina round the cast out nicely with their effortless performances. I’ll watch any and all of Dawson’s work, and her role as the ailing Mary was solid, as was Oyelowo as the stoic Amos.

In a chat with TIFF’s Artistic Director Cameron Bailey, Oyelowo and the film’s cast spoke about The Water Man passionately. It was created from a Black List script by Emma Needell, where she based the story on her childhood and relationship with her father. Her main focus on family dynamics, love, and respect was honored by all involved. The script was initially written about a white family, but with Oyelowo’s changes of the main cast to black plus a female antagonist for Gunner, he hopes for universal empathy and diversity on the screen. He shows that being conscious about what you put out to the world is one step closer to smashing stereotypes.

Overall, you can’t knock an old-fashioned family film, and that’s precisely what we have here. It’s a popcorn, cozy blanket, family night flick with executive producer Oprah Winfrey’s seal of approval, and one that will hopefully bring people together and help kids dream.