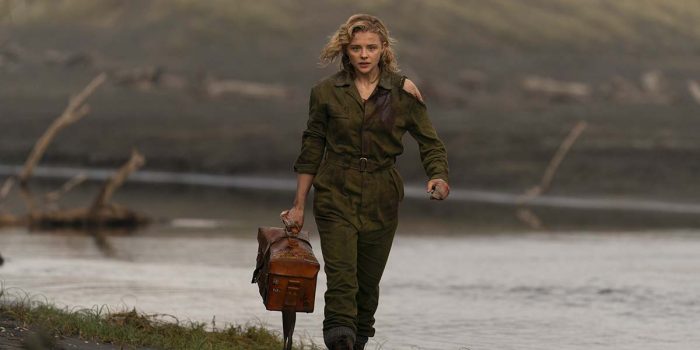 Roseanne Liang turns the action film into a salute to female soldiers with a touch of horror with  Shadow in the Cloud.

During World War II at an Aukland airbase, female flight officer Maude (Chloe Grace Moretz) must get on a plane. She has a package that needs to be safely delivered, and she won’t let rules get in her way. With a forged military order and determination, she gets on The Fool’s Errand bound for Samoa. The airmen are less than thrilled to see a woman on board, and even more disgruntled once they realize she’s not a fragile flower.

Banished to the gun turret, she entrusts the package to one of the crew and has to deal with the mistrust and vile sexism that permeates the plane like a thick fog. Airmen are a superstitious bunch, fearful of the dreaded gremlin that army lore blames for mechanical malfunctions.  When she notices a strange creature on the wing and enemy planes on the horizon, the men have to trust her abilities or face threats they never expect in the air.

With a tongue in cheek approach, Shadow in the Cloud takes on many faces in the hour and twenty-six minutes we spend with Maude and the crew. It’s part radio play, part creature feature, part action film, and all feminist manifesto. Moretz is always a pleasure to watch with her assured performance of the tough as nails Maude; she carries the film’s first and second acts. Maude won’t take any guff from the awful men surrounding her because she’s used to being underestimated. What works is the cartoonish nature of the male characters and their chauvinism, and match the little animated soldier in the first moments of the film, which also gives us a reference for the monstrous threat.

At one point, the film almost becomes a video game, but it’s not terribly distracting. The score could have been less invasive and lent to the video game vibe, but the quieter musical moments were a better fit. There are some fun tense moments, decent stunts on the plane’s underbelly, and nice creature design for those viewers who like full-frontal monster.

Any controversy attached to the film is put to rest, even though the final credits show otherwise. Liang does double duty directing and rewriting the script, and I can’t help but feel the strength Maude emanates through the screen to abolish patriarchal dominance. There’s also a clever subversiveness present in this rewrite you can’t ignore. Ironically, real-life sexism and misogyny are taken over by women in film to right at least one wrong.

If you don’t mind the constant shift in style, Shadow in the Cloud is a great choice for Midnight Madness, full of action and girl power for days, especially in the final moments.