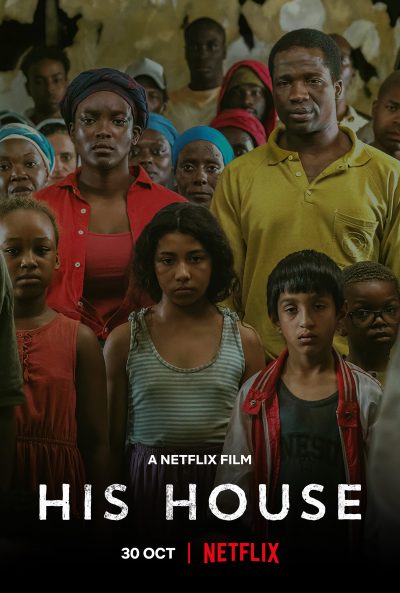 In Remi Weekes’ His House, asylum seekers escape their horrific past only to endure ghostly specters in their new-found future.

Rial (Wunmi Mosaku) and Bol (Ṣọpẹ Dìrísù) have endured a nightmare to reach the shores of the U.K. After a life or death decision to escape their Sudanese town, the couple desperately needs to stay so they can create a new life for themselves. Haunted by their journey, they are thrilled to hear that they’ve been assigned a home and some cash to start their lives in London, but when they arrive at the abode, it’s a little worse for wear in an extremely dodgy neighborhood. Their social worker Mark (Matt Smith), begrudgingly tells them the house is bigger than his place, that they should be “the good ones” to make it easier for other refugees, and leaves them to the job of cleaning up the home.

Rial and Bol want to be born again, start anew, leaving the horrors behind them. They must get used to the rowdy neighborhood, racism, and lack of compassion; and Bol is set about forgetting their past more than Rial. When noises in the wall and strange specters start to terrorize the couple, Bol refuses to back down, but his defiance will jeopardize their status and the secrets revealed are the most heartbreaking of all.

His House is a brilliant first film that takes the real horrors of escaping a war-ravaged country, the tragedy of loss, trying to assimilate into an inhospitable environment while entwining folklore and horror elements covers a unique niche.

In a recent African American Film Critic’s Association interview with Weekes, he said that he loves African folklore and the horror genre, adding that they make the subject matter digestible. With this film, he wanted it to affect viewers emotionally. His own Caribbean-African background helped him with the script, consulting family on their experiences.

Bol and Rial also represent two sides of an immigrant’s experience: Bol, who wants to forget and absorb the dominant culture, and Rial, who wants to keep her culture. It’s very evident as the couple soon become at odds with each other. Mosaku, who you’ve seen most recently as Ruby in Lovecraft Country, is powerful as Rial, who faces the fact that she doesn’t fit in. Dìrísù’s stoic performance mimics many an immigrant who is desperate for a new life. Weekes said the actors worked with him to represent the Dinka culture properly. Look for the scene with Rial and her village women. You won’t have a dry eye after it.

The entire film also had a disorienting feel to it; from the maze-like streets Rial tries to navigate to the home itself. Weekes’ use of sets and camera angles was so effective that you felt you were there with the characters. Some wonderfully terrifying moments harken back to old school scares too. I can’t wait to see what he has in store for us next since his talent is clear.

His House deserves at least two viewings, so add it to your Halloween list.