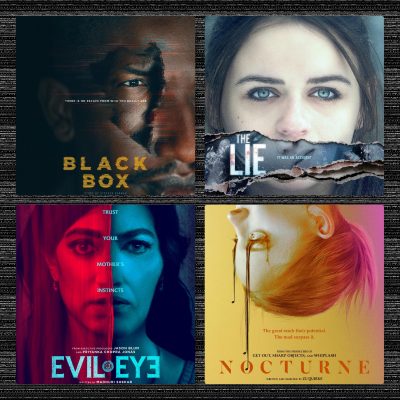 This Halloween season, Blumhouse released four films under the banner “Welcome to the Blumhouse.” The production company known for Get Out and  Happy Death Day presents tales of suspense, betrayal, and thrills with a large helping of representation.

Black Box: Directed by Emmanuel Osei-Kuffour Jr. and written by Stephen Herman, Black Box is a sci-fi journey of Nolan (Mamoudou Athie), a young father raising his daughter Ava (Amanda Christine) on his own. He narrowly survived a car crash that killed his wife and left him with no memory of his life before. When an experimental treatment devised by a Dr. Lillian Brooks (Phylicia Rashad) is offered to him, he starts sessions to regain his memories and opens the door to frightening results. He must retrace his steps to figure out where this terror is coming from. 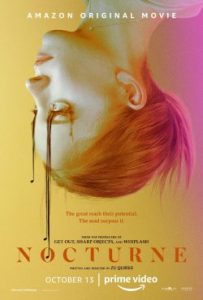 Nocturne: Zu Quirke wrote and directed this supernatural thriller about twins Jules (Sydney Sweeney) and Viv (Madison Iseman), musical prodigies who go to the same school. When Jules, the quieter of the two, comes across the notebook of a classmate who killed herself, she becomes more competitive with her technically brilliant sister. Mean girl tactics become dangerous as Jules does the notebook’s bidding, and familial bonds aren’t enough as Jules strives to be the best. 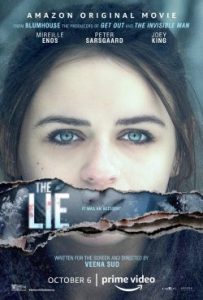 The Lie: Kayla (Joey King) puts her parents in a moral dilemma when she accidentally pushes her friend into frigid waters. The situation quickly spirals out of control as her father Jay (Peter Saarsgard) and mother Rebecca (Mireille Enos) make unusual and rash choices in the name of protecting their daughter. Directed by Veena Sud, this English remake of the 2015 German film Wir Monster pulls on privilege and the lengths some parents will go for their children.

Evil Eye: Pallavi (Sunita Mani) is a modern, young woman living in New Orleans. She is South Asian, and her mother, Usha (Surita Choudhury), insists on badgering her about finding a nice Indian man to marry. When a chance meeting leaves Pallavi smitten with Sundeep (Omar Maskati), Usha starts to suspect that Sundeep is connected to someone terrible from her past. Brother team Elan and Rajeev Dassani used an Audible play by Madhuri Shekar as the basis for the film, and the suspense builds through a series of effective phone calls and flashbacks.

The Dassanis and Osei-Kuffour Jr. both talked about the importance of flashbacks in their films and how choices characters made in their past would impact their future. In Black Box, I also loved seeing Black doctors and professionals in a scientific setting. In Evil Eye, there is a melding of the traditional and modern, respect from the younger generations, and a conversation about abuse that doesn’t blame the victims.  The brothers talked about the cyclical nature of violence and abuse in Evil Eye. The play turned audiobook, and now film really worked with the exchanges between mother and daughter and the generational differences that find common ground in culture and the supernatural. There are also loving bonds between parents and children in both films that tug at the heartstrings.

Nocturne is the type of high concept horror I love.  Artists making the ultimate sacrifice to be the best, beautiful visuals, and music taking center stage, following in the footsteps of mother! and Black Swan. Quirke wanted the supernatural to be mysterious and not strictly monstrous or demonic in her film. The magical notebook was a great device to dictate what Jules would do next. Sweeney and Iseman delivered wonderful performances, and their sibling rivalry was uncomfortable, to say the least. As a first time filmmaker, Quirke is on my list to watch. She has a gorgeous style and an eye for detail that can only grow in her next project.

With The Lie, Sud went straight for things you do for love and how far parents will go to protect their child. In the roundtable, Sud talked about the extreme lengths people go to for love and their children and relaying that into the film. I personally loved that Sud was born in Toronto and filmed The Lie in our hometown.

All four films bring some decent horror and suspense for several tastes, plus some fantastic performances, so be sure to schedule them into your Halloween viewing. You can find them all on Amazon Prime now.