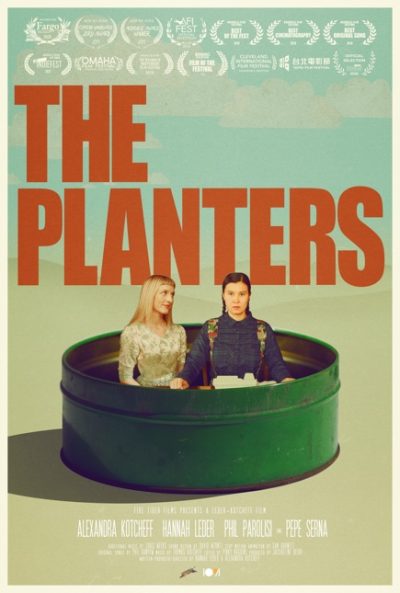 It’s nice to see more female-led productions defying the odds these days. You’ll find this with Alexandra Kotcheff and Hannah Leder’s indie charmer The Planters, which captures loneliness and friendship in this time of isolation.

Martha Plant (Kotcheff) lives by herself in her childhood home. Her parents died a year ago, and she’s a repressed, unsuccessful telemarketer for air conditioning units. Her side hustle involves planting stolen trinkets in tins, burying them in the desert, and retrieving money from her mysterious buyers. When she meets Sadie (Leder), one day burying tins, her life changes. Sadie, along with her two other personalities, has been let out of a bankrupt mental hospital.  Martha takes Sadie in as a housemate, and their friendship blossoms. Sadie’s other two personalities, Emma, a four-year-old girl, and Angie, a religious cult survivor who drinks, appear to Martha when she least expects it, but she somehow manages them well. Sadie helps Martha sell a/c units to save her job and sees visions of Jesus, Moses, and Noah, believing these messages come from Jesus. When Martha has a chance meeting with Richard (Phil Parolisi), one of her customers she’s taken a shine to, the trio embark on a discovery of grief, love, and forgiveness.

The Planters sounds absurd and defies genre, but it’s incredibly charming. The characters are deadpan and cartoonish, but they somehow worm their way into your heart.  Kotcheff and Leder use fantasy elements with Sadie’s stop motion visions animated by Sam Barnett, and a fable-like narrative that seems silly but goes much deeper than what you see on screen. The duo not only wrote, directed, and starred in the film, they were also the crew. The shoot lasted 130 days with just the filmmakers and their cast. That’s a monumental undertaking that I can only imagine is fun and fulfilling. Leder and Kotcheff took great pains to bring their vision to life, with each scene lit and framed to near symmetrical perfection and a vibrant color palette that gives the film a surreal look.

There is a tender quirk to the entire production, down to the shop clerk who never bothers to look at Martha while she steals, the age of Richard or the weird town itself. I’m not sure what time period the film takes place in, but it seems like an alternative 80’s reality. They handle mental illness with kindness as well. Martha accepts Sadie’s mental illness with care, and once she knows what to expect, it’s not really that big of a deal. She accommodates each of Sadie’s personalities instead of forcing her into another institution.

The Planters shows us how the reward of connecting with unlikely people just might enrich our lives. See this award-winning film in theatres here or on-demand December 8th.