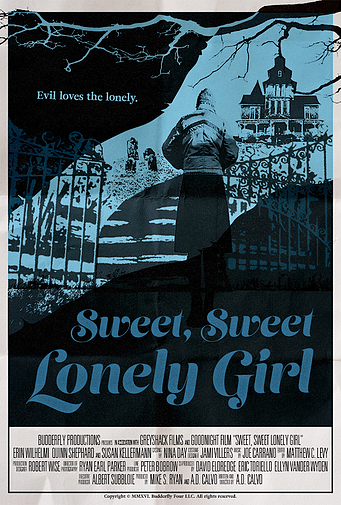 Shudder consistently offers new and exciting films that surpass all the generic horrors out there. This time, they’ve brought us director and writer A.D. Calvo who takes us back in time to combine a lonely teenage girl, unrequited love, creepy gothic horror, and a retro vibe for his latest film Sweet, Sweet Lonely Girl.

Adele (Erin Wilhelmi) is sent by her unfeeling mother to look after her agoraphobic Aunt Dora (Susan Kellerman), in the hopes that they will inherit her fortune. Adele must follow neatly written instructions left by her aunt, who never emerges from her bedroom in a large, rambling house. Her duties include preparing very specific meals of sardines, crackers, and tea, and  Aunt Dora insists on a quiet household. Adele is banned from having any visitors to the house whatsoever, a tall order for a young woman almost out of her teenage years, but Adele seems to be a bit of a misfit and introvert with no friends. When she meets the beautiful and mysterious Beth (Quinn Shephard) in town, they strike up a friendship and become very close. As Adele loses herself in the glow of Beth’s friendship, her attention shifts from her aunt’s well-being to romantic feelings towards her newfound friend, and she makes choices that will lead her down a dangerous path.

Not being familiar with Calvo’s several horror/fantasy movies under his belt, I was pleasantly surprised with Sweet, Sweet Lonely Girl as my introduction to his work. This Sitges and Fantastic Fest 2016 selection brings a gothic, romantic feel that made me think of classic horror writers such as Edgar Allan Poe. The quiet suspense of this film and Adele’s predicament leads the viewer to sympathize despite her childish self-centeredness. Her adoration of Beth and attempts to mimic her cool sophistication and careless attitude shows her desperation to find a connection since she’s mistreated by her aunt and mother. It’s a gothic horror romance and coming of age story all in one.

He also throws in some good old-fashioned morals that no gothic horror would be complete without.  We see this when Adele finds an underlined passage in Aunt Dora’s bible, namely Matthew 6:19-20:

“Lay not up for yourselves treasures upon earth, where moth and rust doth corrupt, and where thieves break through and steal:

But lay up for yourselves treasures in heaven, where neither moth nor rust doth corrupt, and where thieves do not break through nor steal.”

I’m no biblical expert, but it’s clear that greed and what motivates us to be self-serving is central and justifies Aunt Dora’s paranoia. In Adele’s case, it’s not only her poor upbringing, neglect, and the prospect of having some money and nice things, but also falling in love and wanting to impress Beth. Both blind her from the realities of her surroundings.  It’s a nice touch without having to spell out the storyline.

I thought the same-sex love story was treated with sensitivity from a male director. It didn’t feel exploitative, and the young but seasoned actors made the most of the tentative affair. Shephard certainly smoldered like a teenage beauty queen as Beth and Wilhelmi played Adele with an awkward, wide-eyed innocence. Even when Adele’s actions become morally questionable, there is a sense that she isn’t a terrible person, just inexperienced.

The set design and wardrobe captured the early 80’s vibe for a believable period horror, and I really enjoyed the old school hits Adele listens to as well as the eerie scoring and sound design. And if you’re looking for a weird retro horror finale, you’ll definitely find it here, but it’s thoroughly enjoyable. This climax stayed true to old school horrors and had a myriad of influences from Let’s Scare Jessica to Death and Black Sabbath (The Drop of Water segment) that Calvo has mentioned, to the more modern I Am the Pretty Thing in the House and House of the Devil.

Sweet, Sweet Lonely Girl is a slow-burn story, but it’s worth the wait. It has a lot of meat on its bones for a low budget, and there is plenty to speculate well after the film is over. Watch this bit of nostalgic horror fun with a really creepy ending on Shudder.

(Edited from an original post published on Rosemary’s Pixie.)