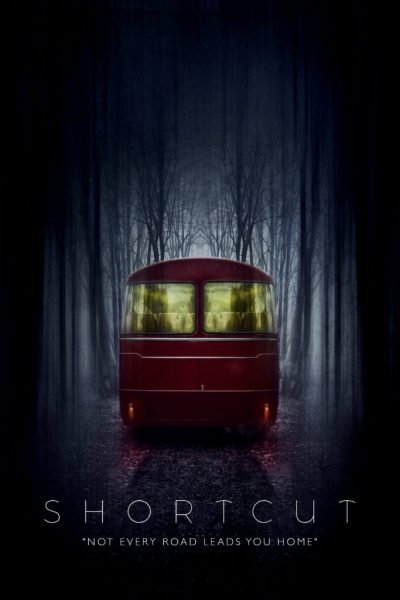 Monsters and teens go hand in hand when it comes to horror, and Alessio Liguori gives us both in his latest film, Shortcut.

Five classmates traveling on a school bus have to make a detour when the road is blocked. After the bus driver Joe (Terence Anderson) finds a side road,  it comes with dead deer in their path and a wanted criminal. Thinking this threat is the ultimate in terror, things go into high gear when a creature attacks the group. The kids must find a way out of this predicament, and clues in an abandoned military bunker just might save them.

Shortcut has the makings of a really good horror adventure film, but it sadly becomes one of look and no substance. Writer Daniele Cosci seemed to be inspired by perhaps Jeepers Creepers and the hit Netflix series Stranger Things. They give us several bits of information that never amount to anything and not enough about our characters. We know there is a lunar eclipse that probably brings the creature out, but we don’t know anything about these kids, save two: Reggie (Zak Sutcliffe), who mourns his dead father, and Karl (Zander Emlano), who loves to eat and amuses his police detective dad. We don’t know why their bus driver Joe is American and they are British, nor do we know why they’re on a bus in the country, the Italian countryside as a matter of fact, and where this creature comes from. Since Shortcut is primarily an Italian production, I can understand the location, but there is no explanation. None. An audience doesn’t need extensive expository information, but it’s always nice when you can place your subject matter according to how it logically fits into time and space. There is also the fat-shaming of Karl, which should be abolished in this day and age.

The creature is great, and the cinematography is really good too. You have to know how to light intentionally dark sets, and Luca Satagostino does a good job with this. The cast works well and makes for a good ensemble, but they never really shine as the story seemed patched together.

If you’re looking for good creature design, then check out Shortcut in theatres and drive-ins this week. Seems like that’s the only thing they didn’t take a shortcut with.